When you book with an account, you will be able to track your payment status, track the confirmation and you can also rate the tour after you finished the tour.
Sign Up
1131

Explore a landscape made for mythological adventures

Tinos is tailor-made for walking: it is the birthplace of the Greek National Footpath Organization and has one of the most remarkable networks of traditional paths in the country. Rocky mule tracks cut through a landscape that seems made for mythological adventures, with verdant groves alive with the sound of spring water, hidden ravines, and giant, wind-sculpted boulders strewn on mountain slopes as if dropped by passing gods.

Coves bite into the coastline – providing in turn, sheltered mooring for pilgrims to the Temple of Poseidon in ancient times, pirates in the Dark Ages, and for wealthy medieval merchants exporting Tinos marble. The simplest of buildings and water fountains are embellished with frost-white marble bas-reliefs; courtyards and paths are laid with pebble mosaics; the landscape is dotted with picture-book villages, churches with tiered, Italianate belltowers or coroneted domes, and – an island speciality – the fanciful miniature towers of a thousand or so pigeon houses.

In ancient times, Greek pilgrims flocked to the neighbouring, sacred island of Delos. Today they come to Tinos in a surge of national pride and religious fervour, to visit an icon whose miraculous discovery coincided with the 19th-century declaration of Greek independence. Twice a year, on 25 March and 15 August, thousands of people, from leading politicians to humble country folk, swell the island’s population of c. 8,000. The island has prospered as a result; there are villages, gems of Cycladic architecture, that are smart, brightly painted, and well maintained. On the land around, though, abandoned terraces, which accentuate steeply contoured hills, cute but crumbling pigeon houses and windmills, are ghosts of a more prosperous rural past.

The island’s history and changing fortunes make for interesting and varied walking, and Tinos is relatively unknown to foreign tourists, so you are likely to have its ancient paths, villages, and valleys, to yourself.

Feel the Tinian day life and live with and meet islanders

INCLUDED IN THE PRICE

Private transfer within the programme on the island

NOT INCLUDED IN THE PRICE

Airfaire in and out of the country

Meals, apart from some breakfasts

Single surplus of approx €100 per week

Travel to Tinos. You will be met at the port and taken to your hotel in Tinos town.

Day 2VILLAGES IN THE CLOUDS 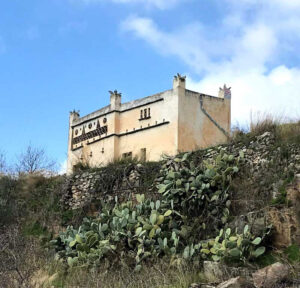 A fine introduction to the small-scale charms of Tinos. Climb from a coast road with views of neighboring islands, above a narrow valley thick with silvered olives, glossy fruit trees, and dark cypress. Pass the ornate pigeon houses that are a Tinos specialty, and rest in the dappled shade of a monastery courtyard. In the dapper interior villages, with their steep, narrow alleys and flower-hung balconies, look out for the decorative extras of marble reliefs and patterned pebbling in the courtyards, water fountains, and buildings. Accommodation: taverna rooms, Falatadhos. 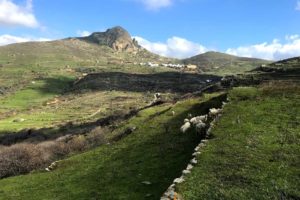 A granite tor, former stronghold of the Venetian occupiers, dominates the landscape as you wind and dip in and out of the secret Edens of deep-cut valleys, and rollover wide-viewed hills. This is a walkthrough island history, for on the surrounding foothills were some of the island’s earliest settlements. Among the scattering of villages are some that are little more than organic extensions of the country rock, others that are palettes of brightly-painted woodwork and flower-filled pots, dark angles, and sun-sharp white. Water is often a companion – there are many water fountains en route, and there may be figs or mulberries to pick from overhanging branches. Accommodation: taverna rooms, Falatadhos.

Day 4FROM A GIANT'S ROCK GARDEN TO THE SEA 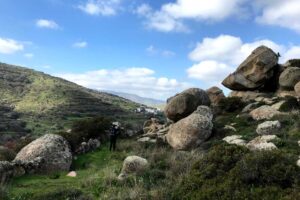 A day of wonderful contrasts – between the severe beauty of a barren landscape to a luxuriant valley. Mainly downhill to the coast, through the Catholic heartland of the island. Clamber down a steep traditional path to the dinky village of Volax, among hills strewn with giant granite boulders. The route winds through the wind-sculpted rocks via a chapel with a perfect picnic spot, to a river valley thick with fruit trees and oleander. Reach the sea, where there’s a choice of wide, sandy bays. Accommodation: taverna rooms, Kolimbithra. 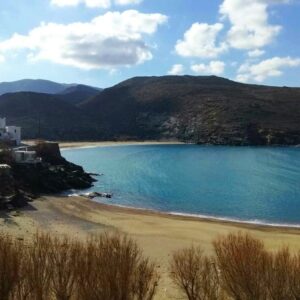 Rest and/or explore at the beautiful coastline near Kolimbithra, or transfer early to the arty marble village of Pyrgos, and settle into your accommodation in village rooms.

Day 6MARBLE COUNTRY OF THE NORTH 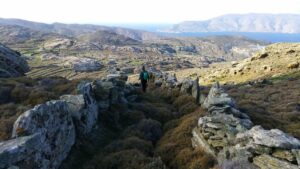 From high in the marble mountains, descend to a dream coastline at Panormos. Abandoned terraces, ruined windmills, and empty farm buildings are poignant relics of once-thriving wheat cultivation. The walk is no marathon but allows time for independent exploring around the coast at Panormos, and opportunities for swimming in hidden bays. The return to Pyrgos takes you to green ravines among the barren hills, where shocks of oleander grow, and an oasis of peace and shade at Kyria Xeni Monastery. Transfer to hotel in Tinos town. 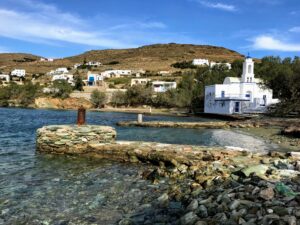 Follow in the steps of farmers and tradespeople along an ancient road that linked the island’s interior villages to the port, and of pilgrims on the route of the Sacred Way to the Temple of Poseidon. Pass remnants of 5th-C BC and medieval fortifications, rest at a Byzantine travellers’ ‘inn’, and visit a beautiful bay that was once a bustling harbour. Exciting new perspectives of island landscape high above Tinos town, a delightful shady village, and a steep, ribbon-of-green valley path down to the coast. Accommodation: hotel in Tinos town 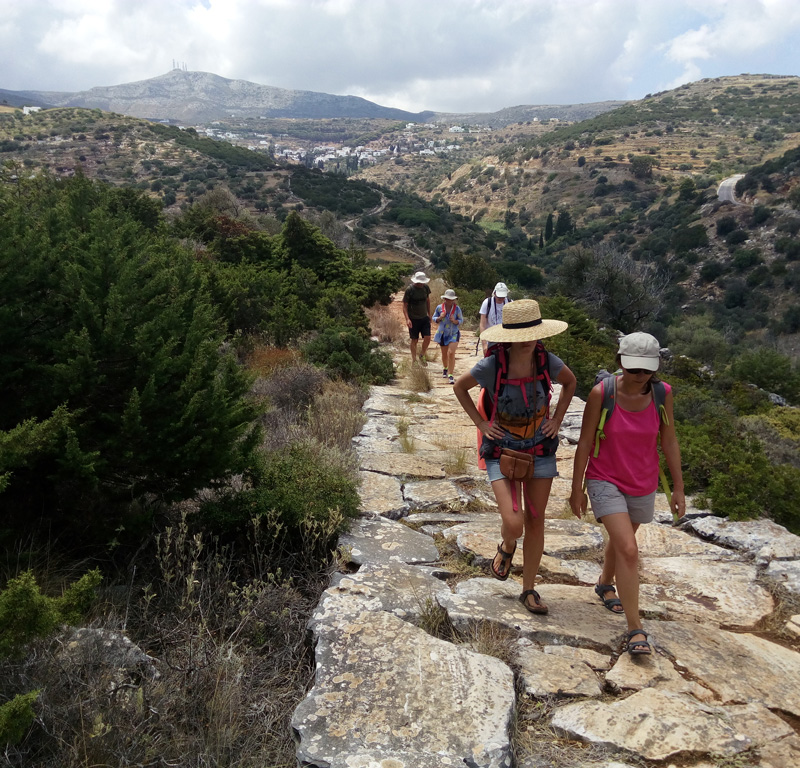 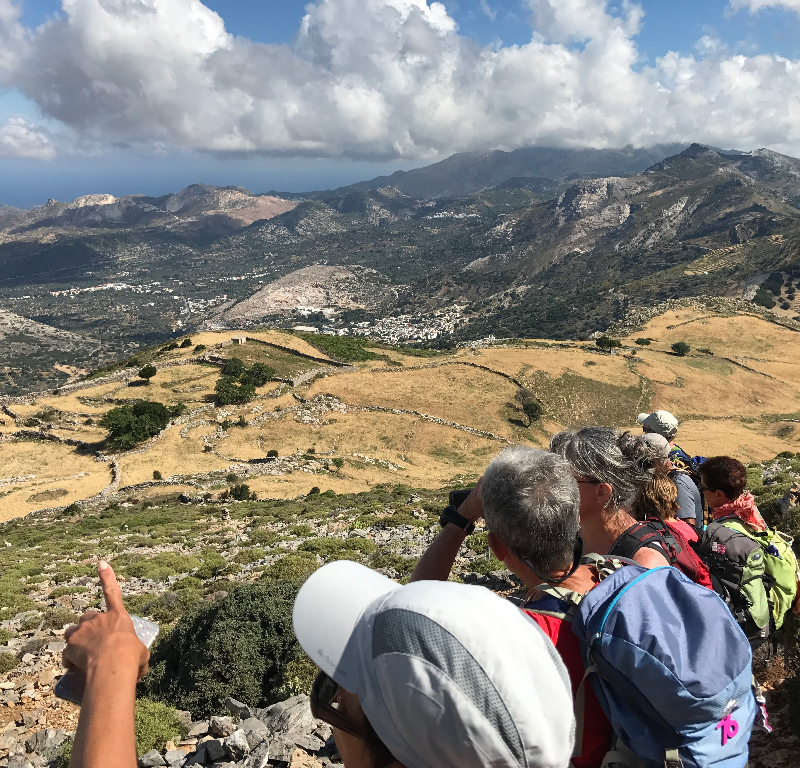 From1,000€
0
1 travellers are considering this tour right now!
We are using cookies to give you the best experience. You can find out more about which cookies we are using or switch them off in privacy settings.
AcceptPrivacy Settings